A sudden and inexplicable event interrupts an interview that a TV crew is conducting with Lina, a famous actress in a villa in Calabria. Waking up after a short sleep, Lina finds herself alone. The crew has disappeared, the water in the pool is now covered by a layer of slime, as if contaminated. The world seems to have emptied out. There is only a small flock of goats wandering along a deserted beach under the moonlight. 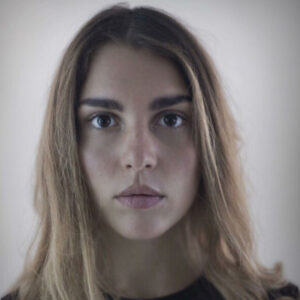 Isabella Torre (1994) is an Italian filmmaker. She graduated in pictorial arts and theatre at the University of Fine Arts. Since then she starred in a number of TV series and films. From 2014 to 2016 she participated in the productions of Mediterranea and A Ciambra. In 2018 she wrote, directed and edited her first short film Ninfe, which had its world premiere at the Venice Film Festival. She is currently working on a feature film on the same subject, entitled Basilea. Isabella attended the prestigious Sundance Mediterranean Lab/ Faliro House where, in 2018, she developed Basilea script. In 2019 she directed Vernice, her second short docu-film, centring on second-generation immigrants in Italy and based on the story of Mojo, a rapper from Rome.