A funeral car cruises the streets of Medellín, while a young director tells the story of his past in this violent and conservative city. He remembers the pre-production of his first film, a Class-B movie with ghosts. The young queer scene of Medellín is casted for the film, but the main protagonist dies of a heroin overdose at the age of 21, just like many friends of the director. Anhell69 explores the dreams, doubts and fears of an annihilated generation, and the struggle to carry on making cinema. 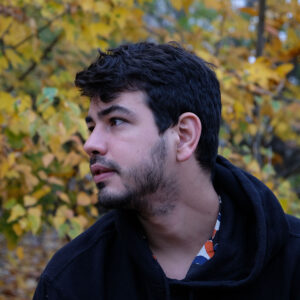 Theo Montoya (1992), originally from Medellín, Colombia, is a director, cinematographer and producer. He is the founder and director of the production company DESVIO Visual, which is dedicated to the creation of auteur films and experimental films. His first short film, Son of Sodom, was part of the Official Short Film Selection at the of the 2020 Cannes Film Festival, IDFA 2020, Clermont-Ferrand 2021 (Special Mention from jury du Prix Documentaire), DISFF 2021 (Grand Prix) and many other festivals around the world. Anhell69 is his first feature film, a Colombian – Romanian – French – German co-production.