February 14, 2004, Radès Olympic Stadium, Tunis. The whole nation stands behind The Eagles of Carthage in the Africa Cup Final against Morocco. After many defeats they are just one step away from glory. Fifteen years after the match, Tunisians still recall the emotion of a day that deeply affected the History of the country. 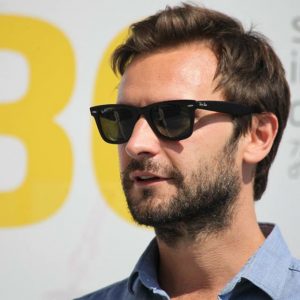 Adriano Valerio (1977), a law graduate from the University of Milan, currently teaches Film Directing and Film Analysis at The International Film School of Paris, at the Fine Arts Lebanese Academy in Beirut and at the Istituto Marangoni. His short 37°4S won the David di Donatello award for Best Short, the Nastro d’Argento Special Prize (2014), and a Special Mention at the Cannes Film Festival (2013). His first feature Banat – the Journey was presented at the Venice International Film Critics’ Week (2015), and shown in more than 65 festivals worldwide. He was nominated for the David di Donatello for Best Emerging Director. His short Mon Amour Mon Ami was presented at the Mostra del Cinema di Venezia (Orizzonti, 2017), at TIFF, it was awarded the Amnesty Award (Paris, 2018) and Bridging the Boarders (Palm Springs, 2018). He directed two episodes of the TV series Close Murders, produced by Rai and Freemantle.